The Good News Of The Gospel!

The Only Proper RESPONSE To The Gospel Is To BELIEVE It. 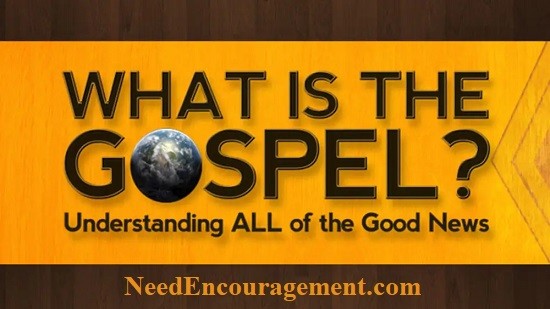 Before we look at the wrong responses to the Gospel, let us call your attention to the only right response to the Gospel.

Your Faith Alone In Jesus Christ Will Set You Free!

One is saved by God’s grace alone through faith alone in Christ alone, based on His finished work alone.

In light of Christ’s death for our sins and bodily resurrection, the issue in salvation is not DO, but DONE. The basis is not our walk, but Christ’s finished work. The means is not works but simply faith.

My analogy would be, let’s say, for example, if a Pastor would say something like, “You need to accept Jesus into your heart.” My analogy is that it would be like trying to tell someone from Illinois how to find the Foot Locker store in Greendale, Wisconsin is by just telling them were Southridge Mall is, but not describing where the Foot Locker store is specifically. There is a chance they will find the store, but there will possibly be unnecessary confusion.

Dealing with eternal life, I think most people would like clear directions to make it to Foot Locker (Heaven) without confusion. I remember many times that I said the “Sinners pray” because I did not seem to be saved, I did that many times, and I asked Jesus into my heart, but it was not until I understood that I was a sinner and could not save myself, I needed a Savior in Jesus Christ.

Today Is The Day To Be Saved

When I claimed the date of June 25, 1986, that I was saved because I was told the Gospel many times (if you do not know the day, the important thing is to know you are saved or not.  I did not know for sure if I was saved or not. I wanted to have a specific day, so I prayerfully asked God, and I narrowed it down to that day. It was the very last time I ever smoked marijuana while I was in long term treatment. Many people were trying to help me and pray for me during those years.

I chose that day to be the day that I got the scales off my eyes and could see clearly that I was a sinner heading for hell. It was not necessarily a feeling that I had, it was more of an assurance that I was in God’s hand, and I could not be taken away from Him ever. God wanted me saved because it says in His word, so He said it, I believe it, and that is that!

Keeping The GOSPEL Simple To Understand!

Scriptures From God’s Word, That Explains How One Becomes Saved Through The Gospel Of Jesus Christ.

John 3:16 For God so loved the world that he gave his one and only Son, that whoever believes in him shall not perish but have eternal life.

John 3:36 Whoever believes in the Son has eternal life, but whoever rejects the Son will not see life, for God’s wrath remains on them.

John 5:24 “Very truly I tell you, whoever hears my word and believes him who sent me has eternal life and will not be judged but has crossed over from death to life.

John 6:47 Very truly, I tell you, the one who believes has eternal life.

John 11:25-26 Jesus said to her, “I am the resurrection and the life. The one who believes in me will live, even though they die; and whoever lives by believing in me will never die. Do you believe this?”

John 20:31 But these are written that you may believe that Jesus is the Messiah, the Son of God and that by believing you may have life in his name.