Home/SIN/GOING TO HELL
Previous Next

Do You Know That It’s Your Choice Whether You Go To Heaven Or Hell? 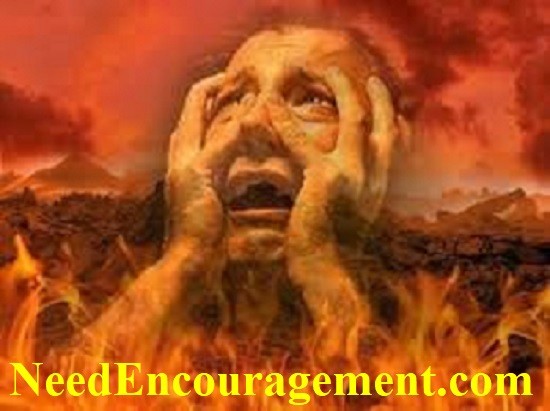 When I was a teenager, I had some party friends who thought it would be so cool to party in hell when they died. (without a doubt, they were misinformed). Hell is not something to joke about at all. Hell and Satan are real. Without Jesus’s sacrifice and our acceptance of His gift, we would all have been condemned to hell. In the book of Matthew 25:41, “Depart from Me, you cursed, into the everlasting fire prepared for the devil and his angels.” But a few verses earlier in Matthew 25:33-34 says that those who choose Jesus Christ will “inherit the kingdom prepared for you from the foundation of the world.” Many people do not know the original purpose of hell was for Satan’s ultimate destruction, sin, and his demon angels. If you think you are heading for hell, God allows U-turns; cry out to God for mercy, confess your sins and turn away from the evil you are involved with. ~ Bill Greguska
Mark 9:43 If your hand causes you to stumble, cut it off. It is better for you to enter life maimed than with two hands to go into hell, where the fire never goes out.

Tony Evans Description Of The Agony Of Hell!

Does It Bother You To Know That Many People Are Going To Hell?

What Did Jesus Say About Hell?

Jesus Told Us In The Bible That Hell Is:

Who Are Those That Will Going To Hell?

In John 3:18b is clear that those who do not believe in Jesus Christ suffer eternal punishment, “whoever does not believe stands condemned already because they have not believed in the name of God’s one and only Son.”

How Can I Not Go To Hell? What Is Hell?

There Are Many Definite Things To Understand About Hell

Jesus spoke about hell a lot. He said, “But I will warn you whom to fear: fear him who, after your body has been killed, has authority to throw you into hell. Yes, I tell you, fear him.” (Luke 12:5). Jesus never implied that a hell is an imaginary place because hell is real.

“And the devil who had deceived them was thrown into the lake of fire and sulfur where the beast and the false prophet were, and they will be tormented day and night forever and ever.” Revelation 20:10

Some people think that when Christians go to Heaven, non-believers won’t exist anymore. That isn’t true. The Bible tells us that we will either go to eternal punishment or eternal life. Matthew 25:46

3. A Person Definitely Can Not Escape Hell By Being Good

Too many people believe that they are good enough for Heaven and that only “evil” people go to hell. But what does the Bible say? John 3:18 says, “whoever doesn’t believe is condemned already.” It’s not about being good enough. It is about believing and accepting Jesus Christ.

4. There Are No Second Chances

Some people think they will get another chance to receive Jesus after they die. However, scripture doesn’t tell us we have another opportunity. Hebrews 9:27 says, “people are destined to die once and after that to face judgment.” There isn’t a second chance to accept Christ. That’s why “. . . now is the favorable time; behold, now is the day of salvation” 2 Corinthians 6:2.

Does it seem unfair that God would condemn someone to eternal punishment for their sins? Even the Bible writers asked: “What shall we say then? Is there injustice on God’s part? By no means!” Romans 9:14

All of us have sinned against God (Psalm 51:4). But God freely offers us eternal life with Him. All you have to do is accept Him. Praise God for sending Jesus to die on the cross to cleanse us of our sins. God made way for us to be washed and rescued from hell!

Now that you know your two eternal choices, you can tell your friends and family how to get to Heaven. Teach them a few facts about Heaven and pray they accept Jesus Christ so they can join you there!

Are Elaine From Seinfeld, And Are You Going To Hell?