There Are Many False Religions And False Teachers! 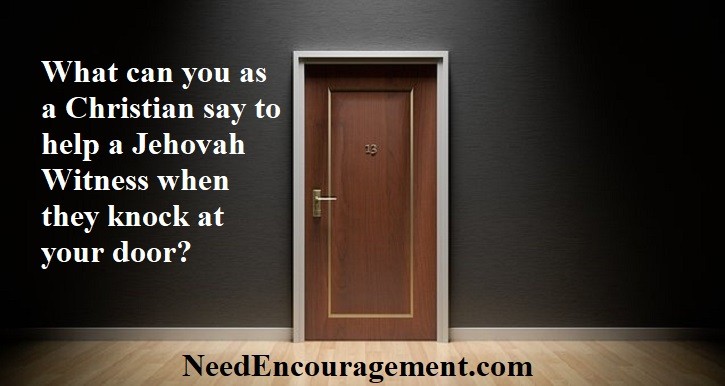 Please contact us if you have questions or comments or want encouragement.

When I speak of false religions, I first must say that many people are very friendly and nice in these religions, but what they proclaim is either partially true and partially false or based on false teaching compared to what the Holy Bible has been inspired by God, and has been proven by both science and history. I am sure most of us have been introduced to a Jehovah’s Witness at some point. I even talked to a few in lengthy conversations to discover they were very nice people! They have studied up about what they believe and travel in two. The big problem is that they follow their own manufactured Bible, not the inspired word of God Bible. Listen to them with respect, then share the good news of the Gospel with them. If you are secure in your Christian faith, do not be afraid to talk with a Jehovah’s Witness, but have your Bible in hand, for their literature is similar but entirely different. Share your faith with them in hopes that they will learn and understand the truth of God from the Bible. ~ Bill Greguska

2 Peter 2:1  But there were also false prophets among the people, just as there will be false teachers among you. They will secretly introduce destructive heresies, even denying the sovereign Lord who bought them—bringing swift destruction on themselves.

False Religions Even In The “Christian Church”!

Who To Believe And Why?


First, I would like to say that each religion (Catholic, Morman, New Age, Bahá’í Faith, Islam, Hinduism, Buddhism, Judaism, etc.) has many kind people involved yet is deceived in their beliefs. Being a Christian, God instructs us in Luke 10:27  He answered, “‘Love the Lord your God with all your heart and with all your soul and with all your strength and with all your mind’; and, ‘Love your neighbor as yourself.’” So in love,  I would like to take you one step further for their sake and those they influence in their thinking. They are following a wide road that they think will get them to their goal, but they are deceived. To share the Gospel with them the next opportunity you get, do it with love in your heart! If you speak down to them with disrespect or have a condemning attitude toward them, you will never be able to influence them or point them to the Lord.


Are False Religions A Problem?

Even though they are an occult, Jehovah’s Witness people do one thing that many Christian friends of mind do not do: go out by two and share their faith (even though it is not Biblical). In their practice, many Christians who believe in Jesus Christ as Lord and Savior would benefit from learning that one thing that the Jehovah’s Witnesses practice. When two Jehovah’s Witnesses come to your door, you will be equipped to ask them two critical questions and share a vital scripture with them after watching this video below. I encourage you to welcome a Jehovah’s Witness to talk with them at any opportunity BUT do not let them control the conversation. Be friendly to them and show them respect since God created them just like God created you. Hopefully, you can plant some seeds to make them think about their salvation.

The Founder is Mary Baker Eddy, who plagiarized the ideas and writings of others to produce the book “Science and Health with Key to the Scriptures.”

Distributors of the Watchtower magazine. The founder, Charles Russell, was a man of questionable character and was charged with fraudulent activities by the Brooklyn Daily Eagle. In 1913 his wife sued for divorce on the grounds of adultery, conceit, egotism, and domination.

(also called the Church of Jesus Christ of Latter-Day Saints) – The Book of Mormon is claimed by many to be based on a novel called “Manuscript Found.”

Joseph Smith claimed that the book of Mormon was a new revelation based on his translation of Golden plates that he found in 1827 on a hill near Palmyra. Following the translation, these plates were allegedly taken up the Heaven. There are no reliable witnesses to the existence of these plates. Since its first edition in 1830, there have been 2000 changes to the alleged revelation from God. A Holy Book with 2000 Mistakes!

(renamed “The Family”) Founded by Spiritist David Berg. A profoundly sad and perverse organization with children forced into sexual acts with adults with ongoing emotional damage. Stay well clear of this group. It’s time to stay well away whenever you hear of a Sect promoting un-Biblical sexual acts. “Children of Satan” would be a better name to use.

(founded by Ron J Hubbard, who allegedly made a fortune from his writings). Several celebrities, including John Travolta and Tom Cruise, are Scientologists. Sadly John and Tom don’t yet understand the reality of what Jesus Christ has done for them and, unfortunately, would prefer to follow the teachings of a cunning conman who will lead them to hell.

The problems with Buddhism are significant:

(1) Buddhist scriptures attributed to its founder Siddhartha Gautama were written approximately 400 years after his (Buddha’s) death. The fact that Buddhism had split into opposing sects at the time of writing means there is no confirmation to say these were the words of Gautama.

(2) The Buddhist teachings are attributable to one man, so if he’s wrong, then the whole religion is false. There are no independent witnesses to the revelation. The Book of Mormon suffers the same problem.

(Followers are Muslims (or Moslems) -Islam is a major world religion with over 500 million followers worldwide. Mohammed is their prophet, born in AD570 in Mecca. Mohammed received frightening revelations in a cave in Mount Hira during AD610, which became the basis of the Koran (Qur’ an). Of concern was that Muhammed had violent seizures and foaming at the mouth during this period. These revelations may have been demonic. Sadly Muslims fail to acknowledge Jesus Christ as central to salvation.

Mohammed is a false prophet. Salvation is through Jesus Christ and his sacrifice for our sins on the cross, not by following the teaching in the Koran or Allah, a false god. Don’t be deceived and misled by this religion. Many Muslims are very earnest and devout, but sadly, they miss the joy of a relationship with Jesus Christ. If Muslims worshiped the same God as Christians, why is there hatred toward Christians worldwide? The reason is that they don’t worship the God of Abraham, Isaac, and all Christians.

The above information was taken from AskTheBible.com/cultlist.htm.

How To Recognize False Prophets And False Teachers?

Jesus warned us that “false Christs and false prophets” will come and attempt to deceive even God’s elect (Matthew 24:23-27; see also 2 Peter 3:3 and Jude 17-18). The best way to guard yourself against falsehood and false teachers is to know the truth. To spot a counterfeit, study the real thing. Any believer who “correctly handles the word of truth” (2 Timothy 2:15) and who makes a careful study of the Bible can identify false doctrine. For example, a believer who has read the activities of the Father, Son, and Holy Spirit in Matthew 3:16-17 will immediately question any doctrine that denies the Trinity. Therefore, step one is to study the Bible and judge all teaching by what the Scripture says.

Below Is A List Of False Teachers. According To: Godwords.org/list-of-false-teachers

I’m often asked to assess what others teach. I do not do this lightly, but it is necessary. Before reading this page, or any of the pages about specific people, I recommend that you read What is a False Teacher? which explains what the Bible says about false teachers and why I would bother to research who they are and what they say.