Home/FAITH/ALL ABOUT RELIGION
Previous Next 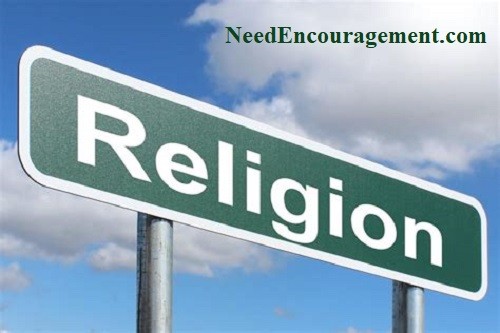 All About Religion Or Rather A Relationship With God?

I hope you find the difference between religion and a relationship with God, for this is so very important to understand. A person can learn all about religion yet still not make it into heaven when they die. My faith is more of a relationship with God; more than it is a religion; my faith is a way of life directed by God’s word, The Holy Spirit, as a result of what Jesus Christ did on the cross for me to forgive me of my sins, and make me right in the eyes of God.

Historically, religion has gotten men into many problems since they sometimes think they can work their way into heaven by being good. Why did Jesus have to come to the world, live, teach, die, and be raised from the dead if that were the case? It does not make sense, but many people believe that their “good works” are what get. them God’s grace and mercy rather than the sacrifice of Jesus on the cross to die for our sins. Below is some information about God and related topics that will give you an idea of what “Religion” or a “Relationship with God” pertains to in more detail. ~ Bill Greguska


James 1:26-27  Those who consider themselves religious and yet do not keep a tight rein on their tongues deceive themselves, and their religion is worthless.  Religion that God our Father accepts as pure and faultless is this: to look after orphans and widows in their distress and to keep oneself from being polluted by the world.

What does the Open Bible say about religion?

What does Biblegateway say about religion?

How Many Beliefs Are Practiced In The World?

There are some 4,300 spiritual beliefs in the world. This is, according to Adherents, an independent, non-religiously affiliated organization that monitors the number and size of the world’s beliefs.

Nearly 75 percent of the world’s population practices one of the five most influential: Buddhism, Christianity, Hinduism, Islam, and Judaism.

Christianity and Islam are the two most widely spread across the world. If all non-practicing people formed a single religion, it would be the world’s third-largest.

The World’s 20 Largest Beliefs And Their Number Of Believers Are:

Stephen Juan, Ph.D., is an anthropologist at the University of Sydney.

All About Religion Or A Relationship?

Some Specific Scriptures to To Encourage You:

Jesus said to him, “I am the way, and the truth, and the life. No one comes to the Father except through me.

And he said to them, “Go into all the world and proclaim the gospel to the whole creation. Whoever believes and is baptized will be saved, but whoever does not believe will be condemned.

If anyone thinks he is religious and does not bridle his tongue but deceives his heart, this person’s religion is worthless.

Religion that is pure and undefiled before God, the Father, is this: to visit orphans and widows in their affliction and to keep oneself unstained from the world.

Who has made us competent to be ministers of a new covenant, not of the letter but of the Spirit? For the letter kills, but the Spirit gives life.

This is the bread that comes down from heaven so that one may eat of it and not die. I am the living bread that came down from heaven. If anyone eats of this bread, he will live forever. And the bread that I will give for the life of the world is my flesh.” The Jews then disputed among themselves, saying, “How can this man give us his flesh to eat?” So Jesus said to them, “Truly, truly, I say to you, unless you eat the flesh of the Son of Man and drink his blood, you have no life in you. Whoever feeds on my flesh and drinks my blood has eternal life, and I will raise him up on the last day.

For whoever keeps the whole law but fails in one point has become accountable for all of it.

He saved us, not because of works done by us in righteousness, but according to his own mercy, by the washing of regeneration and renewal of the Holy Spirit,

I do not nullify the grace of God, for if righteousness were through the law, then Christ died for no purpose.

For Christ also suffered once for sins, the righteous for the unrighteous, that he might bring us to God, being put to death in the flesh but made alive in the spirit, in which he went and proclaimed to the spirits in prison, because they formerly did not obey, when God’s patience waited in the days of Noah, while the ark was being prepared, in which a few, that is, eight persons, were brought safely through water. Baptism, which corresponds to this, now saves you, not as a removal of dirt from the body but as an appeal to God for a good conscience, through the resurrection of Jesus Christ, who has gone into heaven and is at the right hand of God, with angels, authorities, and powers having been subjected to him.

Therefore, if anyone is in Christ, he is a new creation. The old has passed away; behold, the new has come.

There is a way that seems right to a man, but its end is the way to death.

Thus says the Lord, your Redeemer, the Holy One of Israel: “I am the Lord your God, who teaches you to profit, who leads you in the way you should go.

He said to them, “But who do you say that I am?” Simon Peter replied, “You are the Christ, the Son of the living God.” And Jesus answered him, “Blessed are you, Simon Bar-Jonah! For flesh and blood has not revealed this to you, but my Father who is in heaven. And I tell you, you are Peter, and on this rock, I will build my church, and the gates of hell shall not prevail against it. I will give you the keys of the kingdom of heaven, and whatever you bind on earth shall be bound in heaven, and whatever you loose on earth shall be loosed in heaven.”

The thief comes only to steal and kill and destroy. I came that they may have life and have it abundantly.

For as I passed along and observed the objects of your worship, I found also an altar with this inscription, ‘To the unknown god.’ What therefore you worship as unknown, this I proclaim to you. The God who made the world and everything in it, being Lord of heaven and earth, does not live in temples made by man, nor is he served by human hands, as though he needed anything since he himself gives to all mankind life and breath and everything. And he made from one man every nation of mankind to live on all the face of the earth, having determined allotted periods and the boundaries of their dwelling place, that they should seek God, in the hope that they might feel their way toward him and find him. Yet he is actually not far from each one of us, …

For even the Son of Man came not to be served but to serve, and to give his life as a ransom for many.”

The Information Below Found On The Britannica.com